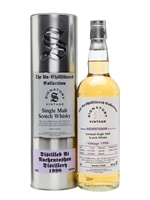 A 1998 Auchentoshan from independent bottler Signatory as part of the Un-Chillfiltered Collection. Distilled on 2 December, it was matured in a pair of bourbon barrels for 17 years before being bottled on 25 March 2016. This distillery is known for it's light, sweet and citrusy character.