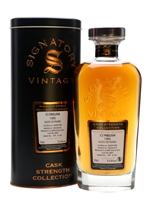 A cask-strength 1995 Clynelish, bottled by Signatory at the start in March 2016 from a single refill-sherry butt that yielded 601 bottles. Fruity and rich with a touch of spice, a great marriage of sherry cask and Clynelish's spirit.