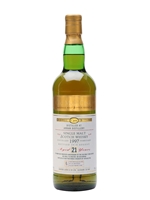 A special edition from Hunter Laing's Old Malt Cask range, celebrating 20 years of bottlings. This Arran was distilled in 1997 and bottled in August 2018 in a recreation of the original Old Malt Cask livery. It was aged for 21 years in a sherry butt. The sherry character is present but restrained, allowing fruity Arran spirit to shine.