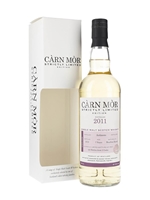 A seven-year-old Ardmore single malt, distilled in 2011 and matured in a pair of ex-bourbon barrels before being bottled by Càrn Mòr in 2019, as part of its Strictly Limited series. Aromas of salty smoke, white peach and vanilla fill the nose, and the palate offers notes of cinnamon, clove, smoked paprika, honey and peanuts.