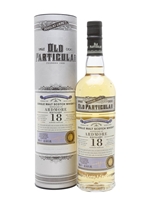 A 2003 Ardmore single malt from independent bottler Douglas Laing, matured in a refill hogshead for 18 years, before being bottled in September 2021 as part of its Old Particular series. Aromas of gentle peat smoke, toasted oak and warming spices fill the nose, complemented by notes of dark dried fruits, smoke, apricot compote and kiln dried barley throughout the palate.