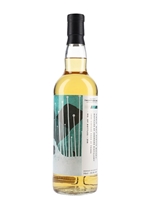 A 1998 Ardmore single malt, mature in a refill hogshead for 21 years, before being bottled by indie bottler Thompson Bros. The nose has peaty aromas of poached pears, vanilla, peach and salty seaweed. The palate offers notes of soft white fruit, salty seashore, wax, white pepper and medicinal peat, with a gentle minerality throughout.