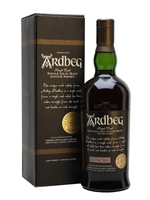 Bottled from a sherry butt for the Japanese market in 2002, this cask-strength dram is from the 1976 batch of sherry casks that took Ardbeg's reputation into the stratosphere.