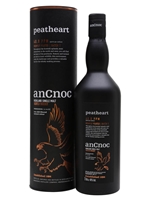 Produced at Knockdhu distillery in Aberdeenshire, this is AnCnoc's smokiest-ever whisky and a welcome addition to the core range for fans of their 'Peaty' series. Peatheart is a single malt with intense smoke followed by orchard and citrus fruit notes.

Peatheart has been named after the peat bogs surrounding distillery, which are described as the heart of Scotland's peatlands.