It is 7 pm on Wednesday 9th of March and Jim and Scott are sitting in the car park at Glengoyne Distillery awaiting the rest of the students led by our lecturer John D. Lamond.  No sooner said than done and the mini-bus arrived with the rest of the gang and we all made our way up to the tasting/blending rooms in the large house.

Jim was over the moon when at the door to meet and greet us all was Joe and Arthur (who were handing out a welcoming drams) the two energetic and enthusiastic Ambassadors for Glengoyne Whisky, who Jim and Nicola have met on several occasions before. 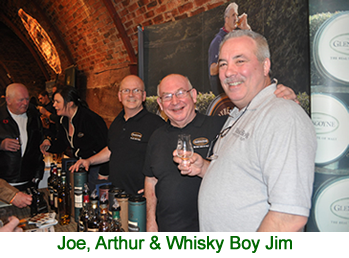 The evening which lasted over two hours was thee best organised and hospitable distillery visit that Jim had ever come across, and a big part of that is down to our hosts Arthur and Joe.

While we were enjoying our first dram Joe and Arthur split us up into four teams of four and we then had a nosing competition, 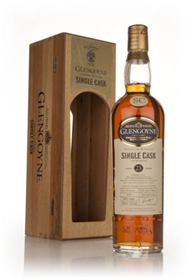 twenty small pots all with different scents and aromas within. Scott’s team were the eventual winners and they were duely rewarded with a dram of the Glengoyne 23 Year Old 1986 Sherry Butt Single Malt Whisky.

All the others (losers) were provided with a consolation dram of the Glengoyne 17 Year Old.

Prior to our distillery tour Joe and Arthur introduced us all to three drams straight from the cask, these were:

These cask strength whiskies all had varying finishes, and the next was better than the last.  The tour went well and Joe and Arthur’s enthusiasm was very evident.

We returned to the big house where we were shown into the blending room to make up our own blend and bottle it. This was carried out with great pleasure and excitement, as several of the students had not had this experience. With Jim producing his “Whisky Boys Select” and Scott producing his “The Young Apprentice” whiskies.

So the end of this fabulous visit came to and end and we all thanked Joe and Arthur for hosting the evening.  Jim and Scott said farewell to the other students, but we are sure that many of us will keep in touch and enjoy the odd dram together.

This was now the end of the Whisky Trail 2011 Course, and a big thanks to John Lamond for his lectures and especially his choice of drams for the great tastings we had. Jim and Scott are sure that we shall keep in touch.