Highland Park, the creators of the Best Spirit in the World*, have launched the third bottling from the distillery’s Orcadian Vintage Series – a 1970 Vintage.

First launched in autumn 2009, The Orcadian Vintage Series draws on the distillery’s connections with Orkney’s rich cultural heritage and the islands’ intriguing myths and legends, which the distillery has come to be a part of since it was established in 1798.

Matthew Turner, Global Controller of Highland Park said: “Following the success of the 1968 and 1964 Vintages, up to ten exclusive limited editions will be released over the next four years. The 1970 Vintage demonstrates the skilful hand-selection process carried out by our Whisky Maker Max McFarlane, to find casks from a specific year that, based on their maturity and exceptional character, will deliver consistency and Highland Park’s inimitable balance.”

Specifically chosen by Max McFarlane, the whisky has been created from seven casks which were laid down with new make spirit in 1970. All were refill casks comprising both butts and hogsheads, producing a total of just 1,800 bottles at natural cask strength of 48% abv.

According to Max McFarlane: “The refill casks used to create this Vintage have allowed the quality and delicate fragrance of the original new make spirit to shine through without being dominated by the wood notes.

“The bottling bursts with aromas of caramelised pineapple and lemon peel as well as Highland Park’s trademark balance of aromatic peat and heather honey sweetness. At natural strength it has an intriguing mix of vanilla and coriander seeds but a drop of water brings hidden peat smoke and cedar wood to the top. This single malt has a satisfyingly long sweet and spicy flavour that hangs on the palate.”

The liquid is bottled in a unique jet back glass adorned with a specially crafted silver embossed Pictish knot which circles the necker and banding. The distinctive pewter ‘H’ amulette completes the design.

The 1970 Vintage is presented in a naturally coloured oak wooden box finished to high specification cabinet quality. The box illustration celebrates Orkney’s Scandinavian heritage, inspired specifically by a carving in the Ringerike style on an 11th century tomb. The illustration is a combat motif featuring a dragon-like creature which is shown seizing a lesser beast.

The Highland Park 1970 Vintage is available in the UK from specialist independent whisky retailers, RRP £2,250.

Colour  – A wonderfully rich and deep burnished gold still showing its clarity and brightness after all these years.

Nose  – First nosed straight, the 1970 Vintage gives the signature honey sweetness you would expect from Highland Park. Next is a burst of caramelised pineapple quickly followed by a citrus kick from lemon peel. When water is added the sweet oak notes come through followed by the scent of nasturtium petals and spicy woodsmoke.

Palate  – At natural strength it has an intriguing mix of vanilla and coriander seeds but a drop of water brings hidden toasted peat smoke and cedar wood to the top.

Finish  – A satisfyingly long sweet and spicy flavour hangs on the palate before the palate dries making a long finish into exceptional.
1970 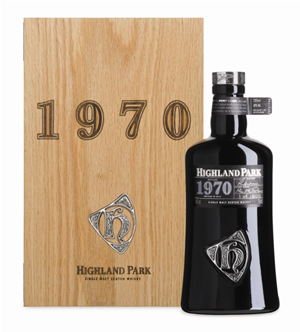 FIFA World Cup began in Mexico, often thought of as the finest tournament of all. The final was a triumph for free-flowing attacking football as the Brazil of Pelé, Carlos Alberto, Jairzinho, Rivelino and Tostão won 4-1 against Italy. As this was the third occasion on which Brazil had won the World Cup they were allowed to keep the Jules Rimet trophy permanently.

The Nobel Prize for Literature went to Aleksandr Solzhenitsyn “for the ethical force with which he has pursued the indispensable traditions of Russian literature.” Patton dominated the Academy Awards with ten nominations and seven wins, including Best Actor for George C Scott, Best Picture, Best Director and Best Original Screenplay. Ali McGraw in Love Story won Best Actress.

Established in 1798, Highland Park is one of the oldest Scotch whisky distilleries. More important than age though, is the combination of traditional whisky-making techniques with obsessive attention to detail that has made Highland Park arguably the most respected single malt in the world.

Five keystones contribute to making the Best Spirit in the World:

Its range of 12, 15, 16, 18, 21, 25, 30 and 40 year old single malts is consistently acclaimed by connoisseurs and experts. Highland Park has won a string of prestigious awards across its portfolio.

This new Highland Park sounds wonderful, the tasting notes makes our mouths water, but at a price of £2250 it could be a little while before the Whisky Boys get a wee taste of this grand vintage dram.

Nicola has said that if she gets a wee win on the lottery she will buy Jim a bottle as long as he opens it and the Whisky Boys do a tasting.

So, Nicola get out there and buy your lottery tickets, Jim could still get a taste yet.