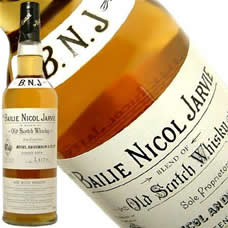 As the label says:-

But distilled and sold by Glenmorangie Plc.

The Bailie Nicol Jarvie or ‘B-N-J’ as it is more widely known, is named after the fictional character (a Glaswegian magistrate) in Walter Scott’s novel Rob Roy.

As the label boasts this blend has one of the highest malt content of any blended Scotch whisky. (BNJ) is selected from some of the best distilleries in the Highlands, Lowlands and Islands of Scotland.

The whiskies in this blend are at least 8 years old and carefully matured, blended and quietly married.

This blend is quite widely available, it is on the shelf of some the large supermarkets, and is easily available on the on line and in specialist Whisky shops.

As you can see from Our Whisky section we do have a bottle in our cabinet, but we are hoping in the near future to have a wee tasting.

This bottle is rarely seen in pub and restaurant gantries, but it is a blend that most Whi