Blended Whisky of the Month – August 2010 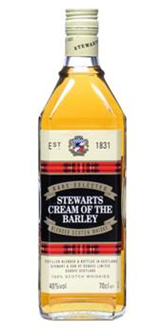 Stewarts Cream of the Barley is a blended Scotch Whisky and was first produced in 1825 by Stewart & Sons of Dundee. It is produced at the Glencadam distillery, pride of Stewarts of Dundee using a specially selected range of up to 50 Highland and Islay single malt Whiskies including sparing quantities of the Glencadam Malt. These are carefully balanced with choice grain Whiskies.

The Glencadam Malt is also in Ballantine’s blended Scotch Whisky

Stewart’s Cream of the Barley is the number one selling blended Scotch Whisky in Ireland.
This was one of the first blends that Whisky Boy, Jim first got his taste for a Scotch dram, and the odd occasion buys a bottle to keep and sip at the end of the day.

This nice wee dram is quite widely available in most supermarkets and certainly online and in all specialist Whisky Shops.

Remember if you go and buy a bottle and we suggest you do please tell them the Whisky Boys sent you.