They say there is nothing like celebrity watching, well I have to agree. As you may be aware Cathie and Dougie joined Jacqueline and I on this trip with the main purpose of scattering my mother-in-law, Kathleen’s ashes. We were hoping to make this trip a celebration of Kathleen’s life and try not to make it a sad occasion.

What a thrill I had to see the two Hairy Bikers waiting to board our ferry to Ireland and got our trip off to a great start. I have never seen such gorgeous, sturdy, machines of masculinity. Their Triumph Rocket Tourers (all 2294 cc and 358 kg) were astounding ! – and they boys were not too bad looking either ! I watched as Cathie and Jacqueline rushed over to have a word with the boys, enquiring what their cooking plans were and getting their photographs taken with them. Now, the important part of this story is actually the bikes. I stood like a child salivating, and explaining to Jacqueline that the bikes were more powerful than our car and trying to get her to enthuse like I was – at which point her will to live began to ebb. She had one of those “Oh God – not you drooling over a bike again” face on. But I cannot tell you enough about the magnificence of these two beasts (the bikes). 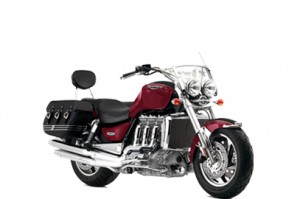 their cooking, they would require a bike that is robust and sturdy and a little dinky moped would not do for them.

The girls continued to enquire where the boys were headed and were told that they were off to cook at Carrickfergus Castle and then onto Co Fermanagh. The plan was that they were filming for their new series and were intending to use l

ocal produce. Si (Simon King the Big Biker) advised that one of their challenges would be to use Dulse in a side dish. Jacqueline did enquire

if they had actually tasted Dulse, as it is “really stinking”. The boys did agree that this would be a difficult one to make into a tasty dish.

So as previously stated the Whisky Boys had a brief chat with the Hairy Bikers, and a few photos were taken. I really w

anted a photo with the bikes, but felt that would make me a real “Anorak” so decided to just quietly covet them. The guys we

re very pleasant and accommodating and we wished them well on their trip.

We plan to keep a look out for the programme and to see just how they got on with their Dulse.

n.b. Have seen a bike – and have fallen in love all over again. It is a Triumph American – you should check this baby out at www.triumph.co.uk – GORGEOUS.

Jim and Dougie The Whisky Boys

p.s. If we need any help with cooking we will give you guys a call,