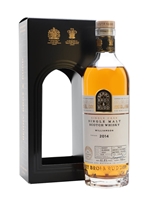 A 2014 Williamson single malt from indie bottler Berry Bros & Rudd, made at Laphroaig distillery and finished in an oloroso sherry butt and bottled in 2021 as part of its Spring 2022 release. Aromas of coastal smoke, iodine, tar, harbour ropes and beach bonfires fill the nose, complemented by notes of plums, dried fruit, cherries, earthy peat, grilled peaches and fruitcake throughout the palate.