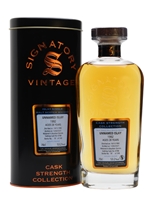 A 1992 Islay single malt from independent bottler Signatory Vintage, made at a mystery distillery and matured in a single ex-bourbon barrel for almost 30 years, before being bottled in February 2021 as part of its Cask Strength Collection.