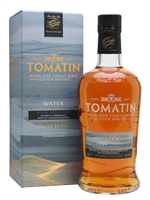 The fifth and final bottling in Tomatin's Five Virtues series. Paying homage to the Alt-na-Frith burn, from which the distillery derives its water, this single malt is weighty and oily, with notes of blood orange marmalade, marzipan and rich toffee. It is an equal marriage of whisky matured in sherry butts and that matured in second-fill ex-bourbon barrels.