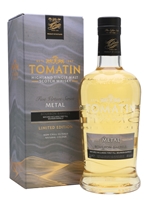 The Five Virtues series is inspired by elements from nature. Each of the five bottlings, all in editions of 6,000 bottles, focuses on different cask maturations.