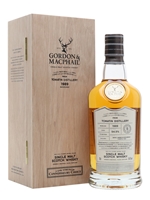 A 1989 Tomatin single malt from independent bottler Gordon & MacPhail that was matured in a single refill American oak hogshead until it was bottled in December 2021 as part of its Connoisseurs Choice series.