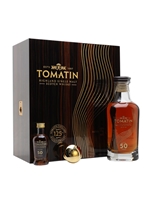 A 1971 Tomatin single malt that was bottled after 50 years of maturation in celebration of the distillery's 125th anniversary. Distilled on 7th August 1971 and filled into a first-fill oloroso sherry hogshead, the whisky was eventually bottled on 8th June 2022 and an impressive 50-years-old. Aromas of dried mango, toasted nuts, dark chocolate and honey fill the nose, complemented by notes of juicy orange, apricot, dried fruit and baking spices throughout the palate.