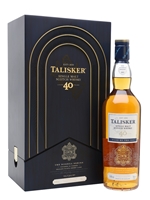 This 1978-vintage Talisker is the first entry in the Bodega Series, a range of whiskies showcasing the distilleries connection with sherry houses and sherry casks since its 1830 founding. This inaugural entry is a marriage of five sherry butts, filled for about three months with 40-year-old Talisker. Before arriving in Scotland, the casks were part of a solera, maturing Delgado Zuleta's award-winning Quo Vadis amontillado sherry.

It's incredibly rare to see solera casks used to mature Scotch whisky, and even rarer for the ancient casks to have been used to create one of Spain's finest sherries. The result is a whisky that combines the elegance of well-aged Talisker with the fruity complexity of Quo Vadis. An impressive whisky.