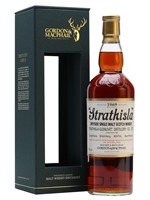 A long aged bottling of Strathisla from independent bottling veteran Gordon & Macphail, whose warehouses are filled with impressive number of treats like this. Clocking in at over 40 years old and packed full of sherry fruit and spice.