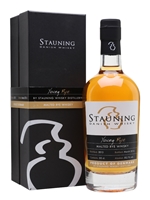 The 2013 edition of Stauning's fabulous rye whisky, made from a combination of malted rye and malted barley. A rich, oily dram with notes of liquorice, rye bread and raisin.