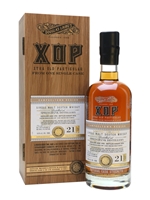 This 1995 Springbank was aged for 21 years before being bottled by Douglas Laing for the Xtra Old Particular series. Distilled in June and bottled in August 2016 after a finishing period ina refill sherry butt, this has notes of toffee, coffee, liquorice and smoke.