The One British | Pedro Ximinez Finish 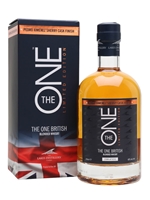 A mongrel whisky that reflects a mongrel nation. The ONE is a blend of whiskies from around the British Isles, selected for flavours which represent the nation's passion, diversity and aptitude for craftsmanship. This special, limited-edition version of the blend has been finished in Pedro Ximenez hogsheads – no-one expected that Spanish intermission.