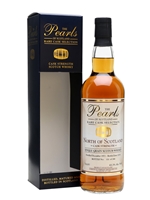 A 1971 vintage North of Scotland single grain whisky released by independent bottler Gordon & Company as part of the Pearls of Scotland series. This was aged for 45 years before 266 bottles were yielded in June 2016.