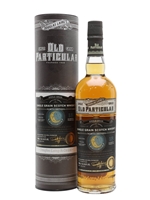 A 2003 North British single grain whisky from indie bottler Douglas Laing, matured in a single refill sherry butt for 18 years, before being bottled in June 2021 as part of its Old Particular Midnight series. Aromas of crunchy granola, maple syrup, buttery popcorn and toasted oak fill the nose, complemented by notes of yoghurt, cream, raisins, baked apples and baking spices throughout the palate, with hints of butterscotch and garden herbs lingering in the finish.