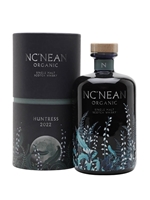 The first spring, seasonal release from Nc'Nean, Huntress 2022 is inspired by Neacheohain, the Queen of Spirits in ancient Gaelic legend and a huntress. This single malt has been made with a combination of three yeast varieties, including one that is commonly used to produce rum. This blend of yeast has created notes of tropical fruit and honeycomb throughout the palate.