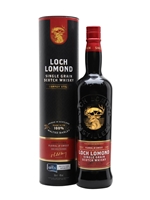 Highland-based Loch Lomond distillery produce this single grain using coffey stills. Despite the name it is produced using malted barley, however its production falls foul of convention, so grain it is! A smooth ride, with a few interesting twists owing to its unconventional production of this Single 'Grain'.