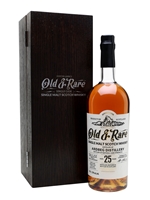 Magnums of single malt Scotch are very rare, even more so for a single-cask 25-year-old Ardbeg. Distilled in March 1991, aged in a refill hogshead and bottled in August 2016. This is classic Ardbeg with notes of fruit, spice and medicinal smoke.