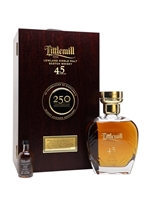 A special single malt for a special anniversary, this 45-year-old Littlemill celebrates the distillery's 250th anniversary. Distilled in October 1976, this triple-distilled whisky was re-casked in 1996 into a pair of refill American oak hogsheads until it was given a final six-month finish in first-fill oloroso sherry hogsheads before it was bottled. Aromas of elderflower, chamomile, grapefruit, lemon zest, toffee, marzipan and vanilla fill the nose, complemented by notes of crème caramel, tart green apple, pear, lime, cinnamon, ginger, nutmeg and oak throughout the palate.