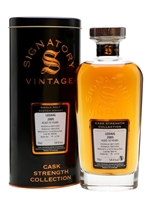 A 10-year-old Ledaig from Signatory as part of the Cask Strength Collection. Distilled in 2005, this peated whisky was aged in a first-fill sherry butt, a combination that has produced superb indie bottlings.