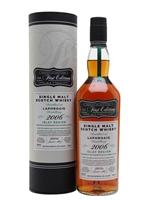 A 2006 Laphroaig single malt from Hunter Laing, matured in a single ex-sherry butt for 14 years, before being bottled in 2021 as part of its First Editions series. Aromas of dried fruit and medicinal herbs fill the nose, complemented by notes of rich peat smoke, iodine, black pepper and hints of fresh, waxy lemons.