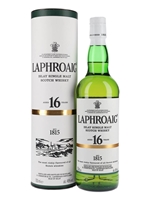 Originally a limited edition to celebrate the distillery's 200th anniversary, Laphroaig 16 is now a small-batch occasional release. It takes the distinctive medicinal, seaside character of Laphroaig's spirit and gives it a few extra years to mellow out and calm down, creating a rich and smoky whisky with more complexity and an elegance that's not often seen elsewhere in the Laphroaig range – spicy peat smoke with well-worn leather and soft, sweet vanilla.