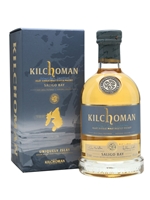 Originally released for travel retail, Saligo Bay is named after an area close to Kilchoman distillery. This five-year-old whisky has been aged in ex-bourbon casks, and offers notes of butterscotch, toffee, citrus and smoke.