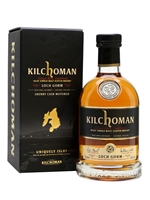 2017 marks the sixth release of Kilchoman's popular sherry-matured Loch Gorm. Distilled in 2009 and aged in oloroso-sherry butts, this is the oldest Loch Gorm bottling to date. This is rich and complex with notes of chocolate, cinnamon, clove and sweet smoke.