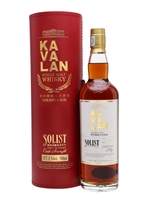 One of the most sought after whiskies from Kavalan's range, matured in sherry casks and one of the most sherried whiskies we've ever had. Big, rich and dark - an impressive dram from the Taiwanese distillery.