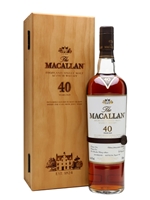 2016 marks on the second time that Macallan have released a non-vintage 40-year-old whisky. It is blended from stocks earmarked for the 2006 release of 30 Year Old, which were left to marry for another decade. Only 500 bottles were produced which were initially sold via ballot on the Macallan website. A true collector's item.