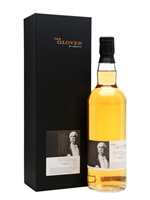 Named after Thomas Glover, a Scot who moved to Japan and set up business that would become Mitsubishi and the Japan Brewery Company. This 18-year-old blended malt contains whiskies from Hanyu in Japan and Longmorn and Glen Garioch in Scotland and offer notes of chimney smoke and blackcurrants.