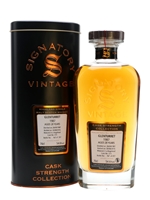 A 1987 vintage Glenturret bottled by Signatory as part of the Cask Strength Collection. Aged for 28 years in a hogshead, this is from an underrated distillery, classed as 'A' by blenders – most of the distillery's production is used for The Famous Grouse and little single malt sees the light of day.