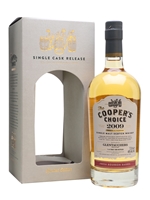 This Cooper's Choice bottling of Glentauchers was distilled in June 2009 and aged in a first-fill bourbon barrel for seven years. This has classic notes of vanilla and coconut with a hint of spice.