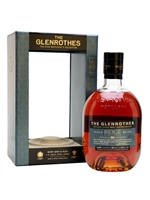 Aged initially in hogsheads before being finished in a Zinfandel cask from Ridge in California, this 24-year-old whisky is rich and creamy with notes of liquorice and red fruits.