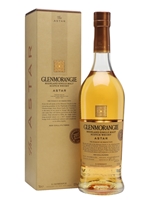 The limited-edition return of Glenmorangie Astar, bottled in 2017. Like the 2008 original, this has been aged in oak casks from Missouri, and has notes of almond, coconut and lots of spice.