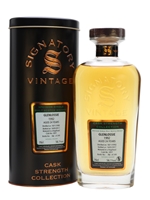 A 1992 vintage Glenlossie from indie bottler Signatory as part of the Cask Strength Collection. Much of the distillery's production is used for the Haig range of blends. This was aged for 24 years in a hogshead prior to release.