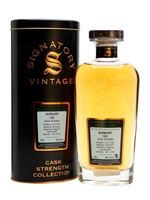 A well-aged whisky from Glenlivet, bottled after 34 years in a hogshead by Signatory as part of the Cask Strength Collection. It is always a pleasure to find early 1980s Glenlivets, particularly when the classical notes of the distillery characteristic have been allowed to shine as they have been here.