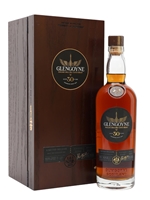 Each yearly release of Glengoyne 30 Year Old is made from just 13 casks. Each bottle is presented in a solid oak box, and the accompanying hessian square and rose gold bung to reflect the traditional cask sampling method used at the distillery.