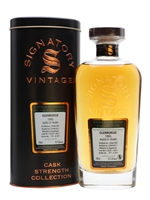 Glenburgie is rarely allowed out on its own, but independent bottlers Signatory are known for their excellent small-batch editions of the distillery's single malts - and the 21-year-old here is no exception.