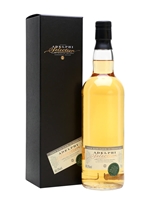 Established in 1826, Adelphi used to be one of the largest producers of grain whisky used for blending. Once the distillery was demolished in 1968 after a washback collapsed damaging the building beyond repair, Adelphi returned to the whisky scene as an independent bottler in 1993. Glen Elgin's typical fruit-cake spice is pushed through with a velvety texture and a long finish of toasted oats.