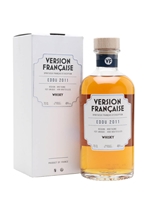 A single malt French whisky from Version Francais, this 2011 Eddu whisky has been matured in an ex-Cognac cask to create aromas of apple, pancakes and redcurrants that fill the nose, complemented by notes of tarte tatin, ginger, Breton cake, cinnamon, almond and exotic fruit throughout the palate.