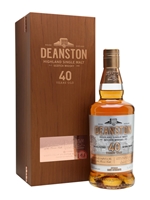 Released in 2017, Deanston 40 Year Old has been finished in oloroso-sherry butts, and is limited to 480 bottles. Rich and sweet with notes of heather honey, apple, vanilla and citrus.