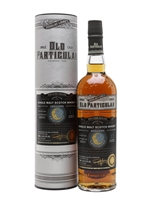 A 2009 Dailuaine single malt from indie bottler Douglas Laing that has been finished in a single sherry butt before being bottled in November 2021 as part of its Old Particular Midnight Series. Aromas of crushed brambles, tobacco, freshly-baked cakes, plums and baking spices fill the nose, complemented by notes of ginger, raisins, currants, barley, mocha, vanilla ice cream and red berry compote throughout the palate.